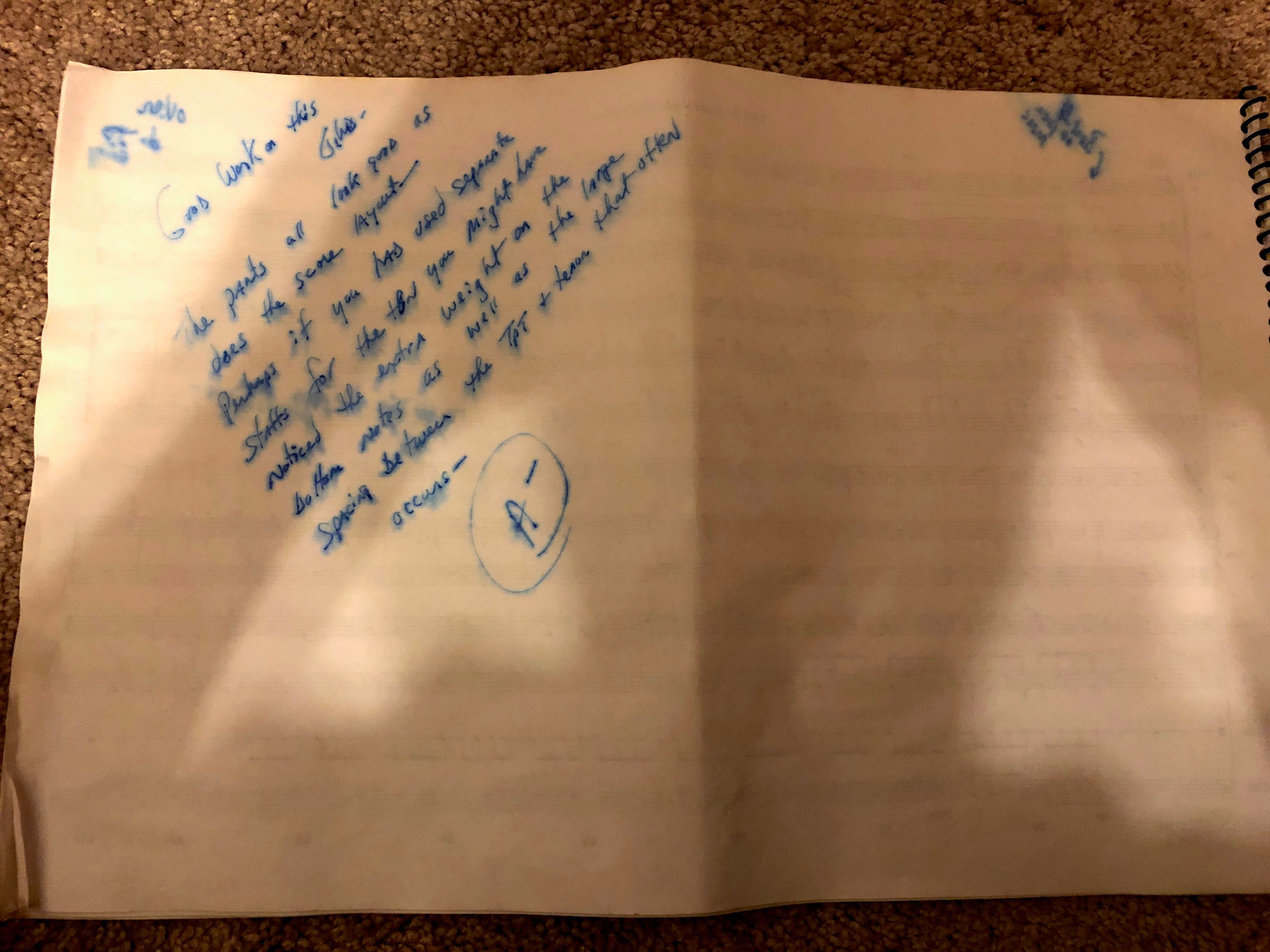 Eighty percent of my hand-written scores were destroyed in a flood at my parents’ house in Florida. It wasn’t a natural disaster or anything dramatic; just an old water heater that couldn’t take the pressure of performing after twenty years. My mother and sister tried their best to salvage what they could so I could assess what was needed to be kept and thrown out when I visited in December. But, as soon as I opened the box, the pungent scent of mildew overwhelmed my nose. The first thing was to trash the irredeemably mutilated pages. The ones that stuck together were easy. Then the ones where the ink of the staff lines blurred any ideas that existed before. Then the ones that stunk... figuratively and literally. A lot of my arrangements and preliminary ideas from my Berklee days were in there. The first couple semesters, I opted into writing my scores by hand because I did not want to waste time trying to figure out how to make everything look correct on a computer program. Hours upon hours, I would write with a Radioshack keyboard until my fingers were blistered; I would crawl out of my room an unkempt mess, stuff the pages into my bag and run to the train because it would be due in a couple hours. Then I would get graded.

“If an ensemble played this, it would be an absolute train wreck.”

Humble beginnings. But now the ink is faded. You can barely see how critically awful I was when I first started out. As I chucked those pages, I laughed to myself that now people will just have to accept that I was always perfect.

I also kept old sheet music that I analyzed and practiced there, too. Beethoven’s Fifth through Seventh... gone. Burt Bacharach’s What the World Needs Now is Love... wrinkled and stained by an absence of affection. The completely notated fiddle part of The Devil Went Down to Georgia... raptured. Michelle by Lenon and McCartney… swept away at sea. Bloated by the water, they were barely recognizable. Those weren’t my compositions, but they helped me learn to be better. Losing those hurt more than any of my pieces because I remember when and why I bought each of them. I remember trying my hardest to figure out how to play these songs. I remember tracing them to figure out how to make my handwriting more legible. I remember humming the parts and trying to write it out from memory, and using them as reference, only to realize I was way off. I also remember thinking my inaccuracies proved to be unique enough to utilize in other projects. I tried to gently unstick the pages, but they collapsed in my hands. As if Thanos snapped away half of my own history.

I suppose this is all a part of growing up. Compartmentalizing old memories in favor of new ones. It certainly felt cathartic. The more I threw away, the more I kept thinking about if this is how a creative type makes their way to the next brave idea. That is a hard pill to swallow for a guy like me. I am a storyteller fueled by nostalgia. It’s one thing to have an idea, but it’s another thing to watch that idea grow with you. Then see that idea has enough feathers to fly or fall on it’s own. It was not the music I was throwing away, but perhaps the old memories attached to them. I had to keep telling myself I never needed my third draft of pieces that I never really liked to begin with. I had to assure myself that majority of this stuff was just clutter and everything I needed was still in my head. I had to remember that some musical ideas just don’t age well.

The idiotic thing about this story is I haven’t even looked in those boxes in seven years. I didn’t even bother to take them with me when I moved to California. I just took solace in the thought that they were tangible somewhere. As long as I knew they existed even if they were worlds apart, then those stories live on, because I just wanted to believe that anything new I do has got to mean something with my personalized historical context. Is it possible to be a memory hoarder? Sure, the random things I picked up from every moment I’ve experienced might be good to test my threshold of relatability, and I could possibly be useful for a trivia night at a bar somewhere. But, I don’t think I will personally or professionally need to remember every word to lyrics I wrote about a girl I loved when I was a teenager. I am no longer that person. Besides the details were irrelevant. The feelings though... that is the key. I think I was more afraid of forgetting how I felt when I had that music. But why value a feeling from the past? Isn’t it just a wave of hormones to trigger your brain to survive what’s in front of you? That seems like a good excuse to use. It was my way of uploading these worked out puzzles so that no one in my immediate vicinity would ever have to struggle with understanding such complexities. Now, I sound heroic. The only problem with that is: there is no point to a life if someone spells everything out for you. You don’t do a person justice by giving them the world. Because it’s still your perspective and it neither cultivates nor validates their own. Then again... it is just my musical interpretations and influences. They weren’t meant to be excavated by uninformed eyes. When I looked at them, I saw the lady in the red dress in the Matrix when most people just saw a green waterfall of ones and zeros. I couldn’t help dancing between the thought of whether or not holding these old pieces were for reference or inspiration later or if I just wanted to store feelings I didn’t want to keep with me day to day. But that is beside the point because they are gone.

So what is the moral of this story? One man’s memories are another man’s trash? That every thing I ever needed has been with me all along? That quality ink and paper can survive even the toughest of floods? No... that’s not it. Maybe the things that defined the kind of person or writer you are eventually stop being so inspiring. But because they leave such an impression on you; you’d try to hold onto that memory and feed off it even though it’s an empty husk now. You can’t even recognize it anymore. They can’t grow with you. So you keep them preserved in a dark room until you are forced to reconcile your past with your present. Four giant trash bags later, I sifted through the pictures I took of the damaged and realized none of it would help me with what I am trying to do now. Deleted. Now, I am back to that square one mentality before I even made those papers. What inspires me to be a better writer? Who do I even write for? How do I make new memories with no structured baseline of influence? The same way I did it before: I just go with it. I will sweat through the details as they come, and learn from both my failures and successes. Maybe this time I’ll keep them in PDF format. If I learn anything from this whole palate cleanse, it will definitely be: change your water heater every ten years.

This entry is archived from my Facebook Page Notes 2.28.19.