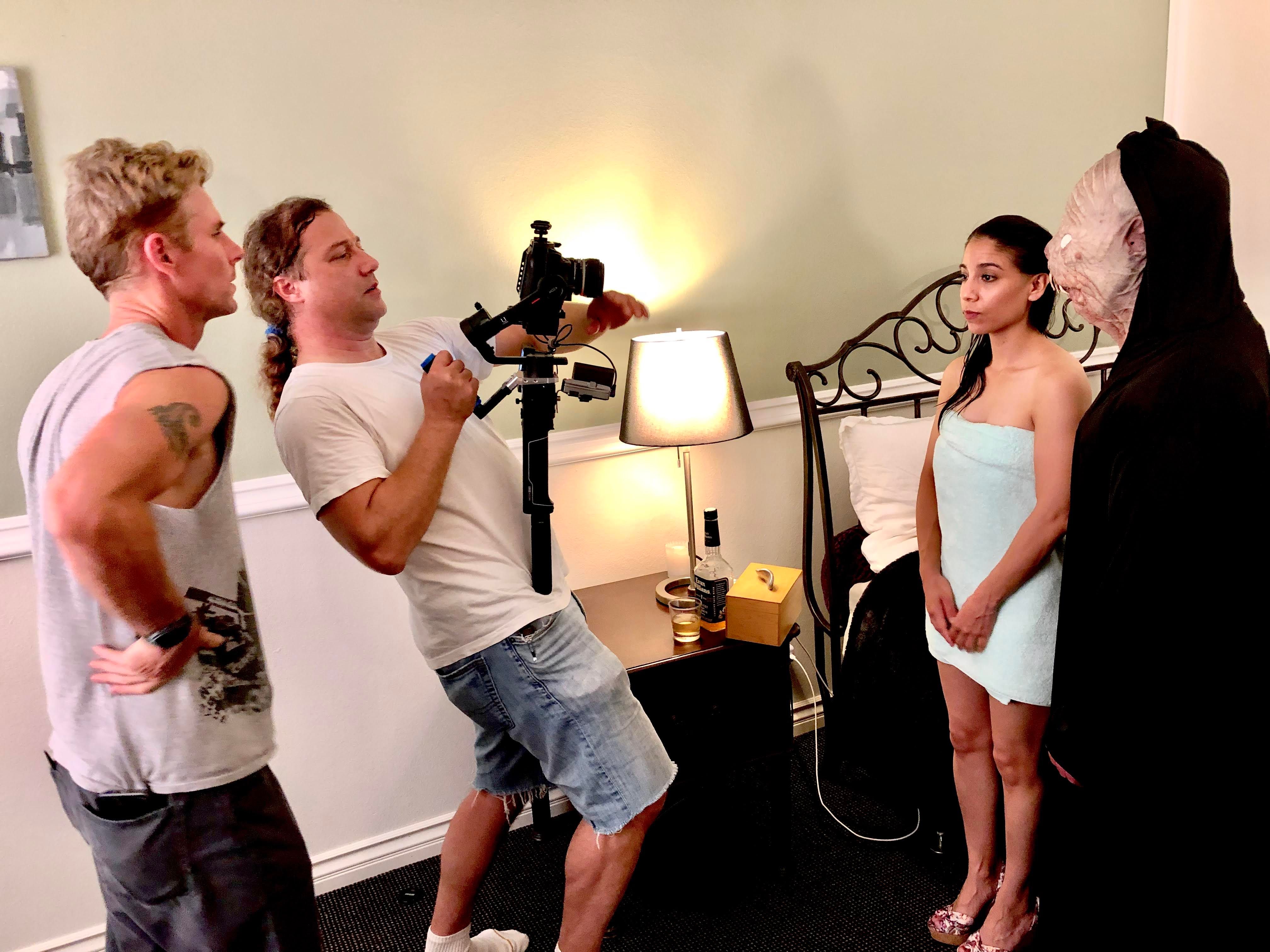 A couple months ago, I had the unique opportunity to work on a horror short with a simple premise that would rely heavily on sound production. Usually, I would tell you the story of how I learned how to use a vocoder for creature sounds, or the fun things I did while capturing pre-production sound. But that can be a video, or something more entertainment-based. This is a story of a very different nature. One could even construe this as a suspense story baked into the suspense story we were trying to make. Submitted for the approval of the midday society, I bring you the tale of Russian roulette.

Preproduction for this film short was relatively easy. We had a small crew of: Bron (Writer/Director), Myself (Sound), Mark (DP), Lisa (PA/Catering), Chris (Lighting), and two actors: Sarkis and Victoria. We've all worked together on previous projects and hold a strong respect for each other and our crafts. My job was super easy, because I already captured all the important sounds needed, and I knew my main focus was dialogue which was less than 10% of the film. We obtained a location in Huntington Beach, and it was a production that started midday (so I could sleep in). It would seem as though the planets aligned, and the movie gods provided us a bountiful harvest of good tidings for a smooth and relatively painless production. We were wrong.

As soon as we arrived at the set location there was a Russian lady there, probably mid-fifties, with a particularly cold disposition. We were told that the location would be available to us without interference from any other party. So, not only were we surprised, but a set of rules had also been placed upon us upon meeting this lady. The first thing she said was "I thought you would only be here until Seven." Our director explained to her that we agreed on using this place for the night. Begrudgingly she accepted those terms, but told us we couldn't wear shoes while we were in the house. As someone who is used to taking off shoes when entering a home, that is no big deal except: we all would be holding sizable equipment and without the shock support of a good shoe, the next day back-pains and foot-pains were inevitable. But we agreed upon it. But then it hit us... who the hell was this lady? With much probing, we find out she is related to the person who owned the house whom we made the initial deal. He was some kind of rocket scientist and was supposed to not be there. She was staying there temporarily. That part would have been good to know from the beginning, but we tried to coexist regardless.

We did the bedroom scenes, which worked out well, because she stayed in the living room. Also, we lucked out with all the pre-production sound I did ahead of time because the lady insisted upon watching her Russian soap operas at loud levels. That's ok, it wouldn't phase me until we did the dialogue, so we kept on with the production. While nailing our timing for the most part, it was time for dinner and then we would film all the living room scenes, along with the small amount of dialogue on the outside. At this point, she tells us that she is cooking a duck. Cool... Then she proceeds to tell us that she is cooking the duck because she is having a small get-together with friends at Nine, which it was already about eight o'clock. After the back and forth, she agrees to keep her friends on the outer part of the house, so we can finish filming. The pressure was turned up to get all of our shots. We finish our food, and try to get things going again. Her friends show up, and its just two older Russian guys. Who don't say anything, but were pretty cordial to us in passing.

The duck must've been great, because these three folks decide to get a level of drunk that I haven't seen since leaving Orlando. I'm talking: every time someone would go outside to dump something in the trash, there would be another empty bottle between the three of them. They were getting a bit rowdy, but nothing too crazy that we couldn't handle. We manage to finish the indoor scenes, and then it was time to do the dialogue. Like I said in a previous post, this is where the time can get lost. Between fireworks being set off (it was around fourth of July), passing cars, and other sounds, the Russians took their party up a notch. Actually, it sounded like arguments, but we weren't sure since none of us spoke Russian and the language kind of sounds like an argument even if you are saying the most delightful things. We had to go back in numerous times to politely ask them to keep it down while we capture the dialogue. Despite the speed bumps, we got what we needed. But, that's when things got crazier.

At a point while Bron and Mark were trying to get some B-roll, I was assigned to get some wild takes of Victoria saying things, just so I had more sound to play with. We were pretty isolated in the front porch, but not even a second after I hit record, the (now very inebriated) Russian lady comes out, she looks like she was crying, and then says:

Drunk Russian Lady: You... Your number... give it to me. (If you read that like the terminator, you wouldn’t be far from simulating the experience)

Me: (looks at Victoria) me?

DRL: Yes! When you are ready for all this, I'll be inside. (She points to her body in a salacious way, but also looks like she's about to pass out in the process)

She then goes back inside, and Victoria laughs at me for a solid minute.

Victoria: Well are you gonna give her your number?

Me: No way... it seems like a proposition, but there are two other dudes in there... they are probably gonna get me alone and tie my nuts to a car-battery and play Russian roulette.

We shrug it off. The director and DP go inside, and I decide to have a cigarette in the front of the house. As I blew smoke signals to aliens, Thinking about life.. and such, Mark comes rushing out.

Mark: Dude, make sure your shit is packed up, we gotta get the fuck out of here.

Me: What happened? I swear I didn't give my number or anything...

Mark: What? I dunno, someone is saying they got punched, and something about a Russian mafia, screw this, we gotta go.

So I put out my smoke, and casually walk back in there to see our PA and Director having an intense conversation with the Russians. As that goes on, we are just pulling all of our bags to the front lawn. One of the Russian dudes walks out quietly passing us, and Bron gets back. Apparently, the Russians got so drunk, that an argument happened, and one of the guys might have punched the lady that wanted to do me. She wanted our cameraman to take a picture of one the guys. Then erratically went between asking us to call the cops to asking us to NOT call the cops. She said she wanted the photo as evidence, because she was probably going to die that night, because one of the guys was in the Russian mafia. So we are counting heads, and we realize that Lisa is still in the house trying to mediate the lady. At that point, Bron and I go back in, just incase (and they were my ride out there) and the Russian dude comes back because he had a bag that he left there. We sneak over to Lisa and tell her to just walk away from this, but she is so kind to people, she felt obligated to stick around and make sure things were okay.

Lisa: What am I supposed to do? I feel roped into all of this.

Me: I am pretty sure they are drunk enough to not even remember you are here. Just wait for an argument and say bye, and let's get the hell outta dodge.

Sure enough, there was another Russian-laden spat, and Lisa just says "Goodnight" and we all ran to the car to get the hell out of there.

As we met traffic on the 405 (Just after midnight), we were making jokes in light of it. Hoping that the Russian mafia and hitman thing was just the exaggeration of a drunk lonely lady. I told them I got propositioned and we laughed about me taking one for the team as a peace-offering. Then we half-jokingly lamented over the fact that if that lady did get murdered by her mafia boyfriend then we have all of our DNA all over the place. But the next day, there were no murders, and we laughed about still managing to get all of our shots in, despite all that transpired.

So, what is the moral of the story? Probably nothing... we are filmmakers. We deal with ambiguity often. If you are exceptional at your role whether it be sound, directing, acting, or assisting, then even the most problematic moments can still work. We were a good team. We had good preparation for the actual task, and we executed it without being executed ourselves. If we learned anything at all, it would probably be: make sure you vet your set thoroughly before production day. You might end up in a bastardized version of a cut scene from Black Ops I.

Bad Vibes is a short horror film written and directed by Bron Theron. It is currently available to view on the BingeHorror App and Amazon. We were also nominated for "Best Atmosphere" in the 2019 Independent Horror Movie Awards. 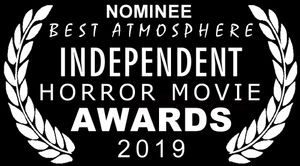