I have been a boom operator in a handful of projects since I moved to California. It’s the most physical form of expression as a sound guy in film, and it allows you the opportunity to meet great people and learn from all the great folks behind the cameras. When you’ve worked in a studio doing sound editing and composition, you work within a very controlled setting. In a studio, you reinforce the acoustics, you position the microphones, and ensure the tech is fully functional for the tasks at hand. The only real wild card is the performers, who pay by the hour to ensure a creative and/or accurate representation of their music. In sound editing and composition, you are even more static as a result of sitting in a room for hours at a time trying to harness broadcast-ready sounds. But on set, there are so many things that can and will go wrong, that you have to be alert, mobile, and sensitive to any of the potential speed bumps the sound editors could have when playing around with the work you capture. The hours are long. Your arms will feel like jello. Your feet will feel like a pile of broken glass held together by a leather bag... but by the end of the day, you truly feel like you were part of the moments the story aims to create.

I have been working on a comedy series for the better part of the year as a boom operator and sound editor. There are only two settings, both in-doors, and it is formatted to be more like a documentary style, influenced by the likes of The Office. The place we film is a community center that allows us to film on only Sundays between the hours of 9AM to 5PM. The show is supported by a multitude of very funny actors and actresses, who bring their A-game every time they are called to perform. Majority of our production issues fall upon the acoustics and atmospheric interference from the community around us. So... me.

The community center theater section where we shoot our wide shots and where the bulk of the stories reside, is very tall with a smooth cement floor with just as smooth walls. So, you can guess that everything is highly reflective. If I were in the studio then I would have something to dissipate all the reflections, and use a nice close directional microphone to get some sweet proximity effect. However, we are actually filming scenes, and the setting is important. It is also important to recognize that we couldn't attach the boom to the camera because it picks up all the mechanical sounds of the camera, including the manual focus flip which would get heavy use with many turn-arounds. 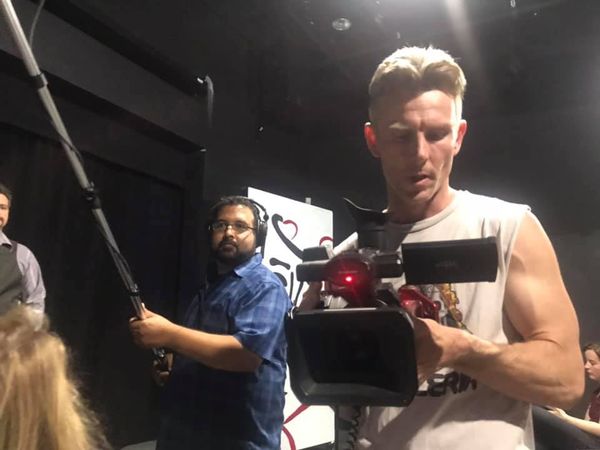 I am sure some of you would be poised to recommend a nice lavaliere microphone taped to the sternum of the folks talking. And at one point I did consider it, however our production team was bare minimum: Camera and Sound guy. Our DP/director also wanted to maximize productivity while keeping the supporting crew at an essential minimum. He wanted to make sure that what we captured sound and the shots all in one place, so that he could chop it up, and then send me the sound file to balance, mix, and edit. So, that meant no field recorder, direct connection to the camera, and a lot of moving around to the minimal limits of how far my headphones and microphone cables would allow me. Also, I hate lavaliere microphones. Say what you want about them, but I have yet to find one that I don’t eventually replace with a boom take. If a manufacturer of lavaliere microphone reads this and wants to prove me wrong, I would be happy to test anything anyone sends me, and will honorably concede my biases if proven wrong, but so far, they are garbage to me. Besides, a good shotgun microphone will accurately capture the angle and depth of its subject. Since I am working with a single camera, tangled with the cameraman, there is a natural element to this that one can appreciate.

However another issue with the room falls in the location. Though it is a big place, the walls are rather thin. It is located in the center of a park and neighborhood where children play, and the homeless loiter. Not to mention every plane and motorcyclist in Long Beach feel it necessary to ride around that area regularly. These atmospheric disturbances are nine-times-out-of-ten the reason why we spend a lot of time on each episode. These are not situations that you can easily remove from the takes, and the frequencies cut right through the mids in a way that can’t be EQ’d while someone has a monologue. Also the shot and sound have to be on point at the same time, because everything is smushed together. That is why you have to have a strong production partnership. The camera man and I are constantly communicating. If I hear one disturbance, it will more than likely need to be a cut. But, since I am also the sound editor, I also know the threshold of my own abilities to discern between allowable and irreconcilable problems. Though I absolutely loathe the idea of fixing things in post, sometimes you need to cut your losses and accept what happens and make a mental note of how to fix it later. If a car rolls through the neighborhood or a kid skateboards close-by, the actors will still perform, the director will look at me, and if I make a crazy face, they know when to cut. This takes me back to my days in the bands when we would jam out on stage and we had special gestures and looks we would give each other to continue a phrase or end it. 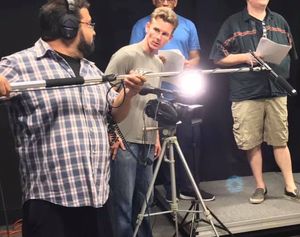 Air, hiss, and rumble come with the territory, but those are easily fixable when rinsed thoroughly with a restorative de-noising plugin. I played around with the Era-D and Isotope RX. I can’t ultimately say its a fix for all, but after a couple passes, it does make things sound cleaner. De-reverb hasn’t been too great to me. If you try to use such a plugin with a subject that has lots of room tone, they end up sounding extremely hollow. Same thing can happen with the de-noising plugins, and you can run the risk of artifacts being introduced. Its a rarity for me, but that is usually a result of proper mic placement. Depth is a matter of taste. There are a handful of reputable de-reverb plugins, but ultimately it depends on the shot. If it is a wide angle, I will most likely leave in the reflections because the space is captured on film. If everything sounded up close, then it wouldn’t fit right with what people are seeing on screen, and that would take them out of the moment. Right, Dark Knight Rises? So I am eyeballing exactly where my mic needs to be to minimize the level of reflective capture while keeping a strong focus on the subjects at hand, while trying my best to stay out of the shot. That can and has become a conflict of interest between myself and the camera man, but every good relationship has some compromise in it, and that means one or both of us contorting our bodies in a weird position to give each other space while doing our best to get the shot  we intend. Sometimes I cheat it with the actors, where I will place my boom through a crowd and have the actors hold it to make the shot work while cheating the audience into thinking they have a nice close response even when I am not there.

Nothing's As It Memes

When I work on albums, I try to use reference albums so I know how I want my mixes and tones to be. Realistically, when I decide to do the sound editing, my reference television shows would be more documentary-based, like The Office. However, the sound guys/gals on these award winning shows have either never posted their techniques or it is unbelievably hard to find when the Google search of "The Office Production" vary between websites on staplers and legit 90% of the memes on the internet. So, the musician in me falls back on my ear-training and dictation skills, except instead of intervallic relationships in music, I am trying to recreate mixing and miking techniques through tonal associations. It would be an absolute honor to talk shop with one of these talented folks and see how they handle everything, that way if we get to do a second season, I can arm myself with the tools necessary to be even more efficient. Everyone has their style, and some are more successful than others. All are valid as long as you get the job done. But until then, I am happy to share my experiences in the hopes that someone out there doing something similar to me, can build from it and render fantastic results. 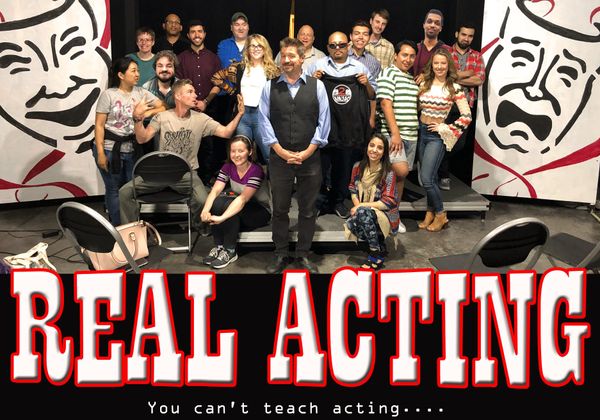 Real Acting is in the distribution ether, and will soon be available to stream on Amazon.